More about the SW Climate Hub by Jennifer Perez

The USDA Southwest Regional Climate Hub for Risk Adaptation and Mitigation to Climate Change, located at the Jornada Experimental Range in Las Cruces, New Mexico, is an innovative network designed to deliver science-based knowledge and climate-smart information to farmers, ranchers, and land managers in order to more effectively respond to climate change.

Although humans have adapted to natural climate change for millennia—the earth’s earliest nomadic inhabitants followed animals whose seasonal grazing patterns reflected changing weather—it is evident today changes may happen more rapidly, not allowing sufficient time to adapt.[1] As a response to these challenges, the Regional Hubs for Risk Adaptation and Mitigation to Climate Change were established in 2014.

After a competitive process between USDA facilities, the Jornada Experimental Range was chosen to represent the Southwest region as one of seven main hubs in the United States. The hubs link a broad network of partners focused on climate risk adaptation and mitigation, including the National Oceanic and Atmospheric Administration, U.S. Department of the Interior, the private sector, and universities and extension agencies across America.

Specifically, the Southwest Climate Hub has chosen to partner with the Cooperative Extension Services within each of the region’s six states (New Mexico, Utah, Arizona, Nevada, California, and Hawaii). The hub ties into existing, highly professional extension organizations to link science-based information with agricultural producers and land managers, translating research into action. Scientists at the hubs develop and interpret practical information to help adapt and adjust resource management in response to climate change.

In the Southwest, effects of a changing climate already impact day-to-day decisions of people whose livelihood comes from the land. In a region historically characterized by its arid climate and highly variable rainfall and temperatures, farmers, ranchers, and forest landowners are now dealing with the myriad ways climate change expresses itself, including:

One of the most exciting parts of the Southwest Hub is that it expands over a very diverse region, encompassing both the area with the least amount of annual rainfall—Death Valley, CA—and the state with the most annual rainfall—Hawaii. This diversity allows scientists at the hubs to come together to offer regional advice, as well as pinpointing local needs. The Southwest Regional Hub at The Jornada delivers real support in our area, working locally and regionally to provide:

The objectives for the Southwest Climate Hub this year are outreach and capacity building. We aim to:

Modern civilization has experienced rising temperatures and an increasing frequency of heat waves over the past century. Though seemingly insignificant, in the Southwest the average temperature rose 1.6 degrees Fahrenheit between 1901 and 2010,[2] causing a cascade of effects to both humans and ecosystems. Today, scientists define climate change as the statistically relevant changes in the atmosphere that persist over extended periods of time. Average climates, which encompass temperature, precipitation, and wind patterns, have experienced significant shifts globally.

Although climate is naturally dynamic, it may be changing more dramatically now and in the future due to human influences. Greenhouse gasses, most notably carbon dioxide, emitted into the atmosphere from fossil fuels and agricultural production, are one of the largest contributors to climate change. In the U.S., agriculture is responsible for about 6 percent of greenhouse gas emissions, but on a global scale the link is much more striking, with 30 percent of emissions related to agriculture.

Scientists recognize that increases of greenhouse gasses in the atmosphere, rising temperatures, and fluctuating precipitation patterns will likely affect agriculture—including livestock—which relies on ecological processes.[3] When these processes are impacted, so is agricultural production. Since livestock accounts for one-third of all agricultural profits of the six states comprising the region, the Southwest hub views animal agriculture and climate change as a dynamic concern.

Improved agricultural and land management practices can have a significant role in addressing the atmospheric build up of greenhouse gases over the next century.[4] Scientists at The Jornada focus on finding solutions to today’s issues in rangeland management, which makes this site valuable as a hub for climate change research in agriculture.

Water and Climate Change in the Southwest

With the arid nature of the Southwest climate, we depend more on irrigation than any other region in the U.S. In fact, more than 92 percent of the region’s crops are irrigated. The Southwest produces more than half of the nation’s high-value specialty crops, which need irrigation and are especially vulnerable to extremes of moisture, cold, and heat. Changing climate conditions in the region impacting temperatures and altering growing seasons can trigger extreme events directly related to regional catastrophes and water shortages.[5]

The hub also works in tandem with the Agricultural Research Service (ARS) at The Jornada, which has established efforts to conserve our desert’s most limited yet vital natural resource—water. Since 2006, The Jornada and the Natural Resources Conservation Service partnered with the National Science Foundation, New Mexico State University, and landowners to expand and upgrade instrumentation for the Upper Rio Grande Watershed in northern New Mexico. This watershed provides 56 percent of the irrigation for the state’s agricultural industry. The collaboration made possible improved forecasts for the water supply, giving landowners real time information so they can make informed decisions about the best crop selection, the most productive planting times, and the most beneficial irrigation scheduling.

To learn more about the Southwest Regional Hub, and about climate change locally and globally, explore the following resources: 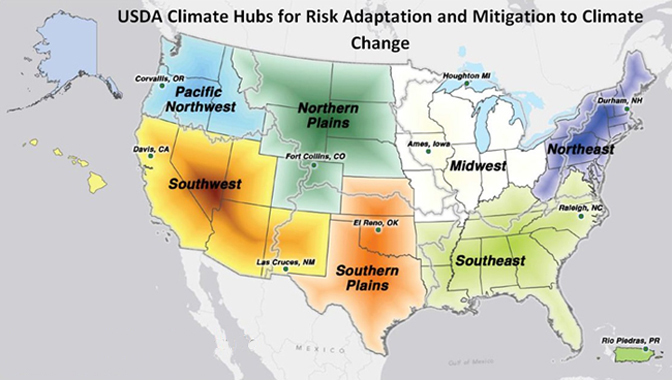