A paradigm is a description or illustration of theories underlying our scientific views.  We describe paradigms to convey our current understanding of the systems we study.  In terms of the arid rangelands studied by scientists based at the Jornada since the early 20th Century, our understandings, the paradigms, have changed over time as the information we have collected about these lands has grown.  Recently, we and our colleagues have written a set of papers about these new paradigms that will be published in February 2015, in a special issue of the journal Frontiers in Ecology and the Environment (FEE).  As soon as this special issue is available, we will make these papers accessible on-line.  In advance of publication, two figures from the introductory paper to this special issue of FEE are included below.

Figure 1 illustrates how one paradigm or framework concerning vegetation dynamics has changed and expanded in recent years. Our recent studies continue to illustrate that these landscapes are complex, but that we can still understand and employ this complexity in land management.  Basically, both location and context matter in terms of how landscapes will respond to conservation practices and management.  Our work continues to identify the principles that underlie location and context.  More specifically, the older paradigm was that with degradation our desert grasslands would transition to desertified shrub-dominated states.  This transformation, often seen as permanent, was termed “desertification”, and supported by observations both here at the Jornada and other arid lands around the world.  This paradigm was too simplistic.

The following text, describing this new paradigm, is adapted directly from this upcoming paper by Peters et al. (2015):

First, desertification can occur even in the absence of livestock grazing (Peters et al. 2006). Second, the Jornada grassland landscape present in 1858 has been transformed into a landscape consisting of spatially distinct communities dominated by one of three shrub functional types (honey mesquite, creosotebush, and tarbush). This suggests that processes acting on similar initial vegetation can result in divergent dynamics and outcomes on landscapes that differ in soils and topography. Third, transitions among different shrubland types have occurred through time (e.g., from deciduous tarbush to evergreen creosotebush on the upper slopes between 1915 and 1928; an increase in mesquite since 1928 across sandy basins). This occurrence of different shrublands suggests important functional changes beyond those represented in the traditional desertification paradigm. Fourth, recent increases in native perennial grasses in shrublands occupying former grasslands following a series of wet years suggests that vegetation shift reversals may occur, although the processes and climatic events required for long-term grass persistence are unknown. Fifth, the recent increase in non-native grasses following a series of wet years (Yao and Peters 2014) suggests that future land cover states may be quite different from the past. Sixth, at the regional scale, drought and human population increases are expected to shift land use from agriculture and ranching to multiple use, in particular in developed countries.  Landscapes will increasingly consist of mosaics of exurban development intermingled with local climate-smart agricultural enterprises that are informed by the past, but adapted for future conditions (see Figure 2). The traditional desertification paradigm is too narrow in scope to accommodate these six sets of observations.

Part of what is important with this new paradigm is understanding local context – the specifics and history of the landscape you work within. Figure 2 is our characterization of the dynamics and transitional forces on the Jornada landscape over the past 1000 years. 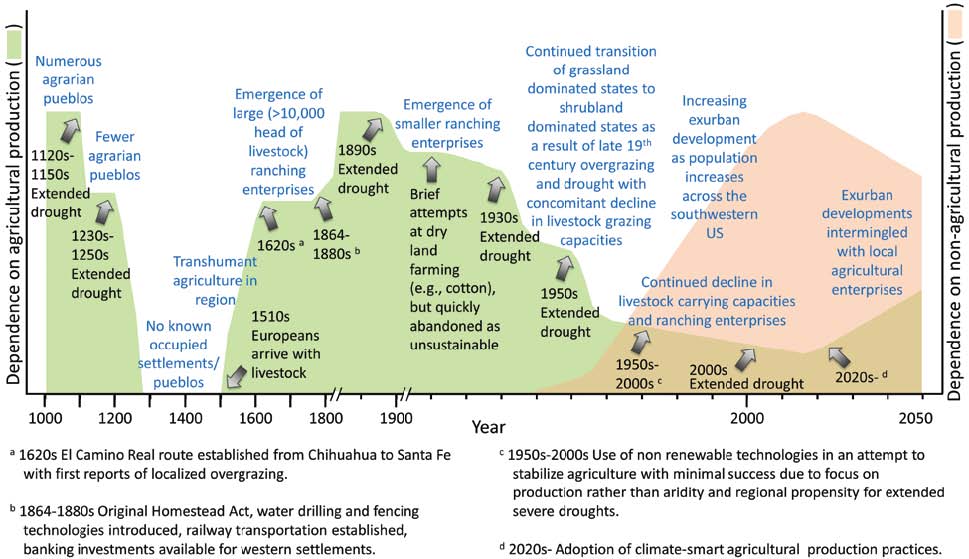 Figure 2. Millennial transitions between agricultural (green) and non-agricultural (beige) human activities (blue text) and examples of key drivers of those transitions (black text and arrows) within the Jornada Basin of southern New Mexico, USA. Transitions anticipated over the next 40 years include incorporation of agricultural activities within exurban developments and adoption of climate-smart production practices and technologies (From Peters et al., 2015. Frontiers in Ecology and the Environment, IN PRESS).

Applying these ideas to other landscapes doesn’t require a thousand year characterization, but this kind and length of perspective is quite useful in shaping our ideas, our paradigms. The knowledge and technology we work to develop from this information can then be based in as intense an understanding of our systems as possible.

Please look for this new journal issue in early February 2015, with its discussion of new paradigms in vegetation transitions, landscape ecology, land management, education, emerging technologies, and ecosystem services from arid rangelands here in the Southwest and around the world.