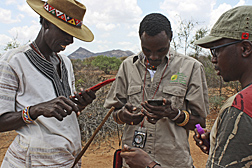 WASHINGTON, May 29, 2015—What do “cloud computing” and “terra firma” have in common? A suite of mobile phone applications ("apps") that, once all are released, will connect agricultural producers around the world and provide them with shared knowledge on ways to maximize the land’s productivity while protecting its resources for future generations.

The first two apps, dubbed “LandInfo” and “LandCover,” were released this month and will allow anyone using the mobile phone technology to collect and share soil and land-cover information as well as gain access to global climate data, said Jeff Herrick, a U.S. Department of Agriculture (USDA) scientist. He and cooperators developed the apps as part of a five-year, multi-organization project called the “Land Potential Knowledge System” (LandPKS).

“The LandPKS is a global network of open-source databases and computer simulation models that anyone with a mobile phone and a wireless or cellular data connection will be able to access,” explained Herrick, with USDA’s Agricultural Research Service (ARS) in Las Cruces, New Mexico.  Read more ...

A Land-Potential Knowledge System (LandPKS) is being built that will allow the potential of land to be defined explicitly and dynamically for unique and constantly changing soil and climate conditions. The land potential assessments will be updated based on new evidence regarding the success or failure of new management systems on different soils. Our knowledge engine, together with mobile phone applications and cloud computing technologies, will also facilitate more rapid and complete integration of local and scientific knowledge into land management.

Go to https://www.landpotential.org for more information.