Obviously, implicit in the original goals of the Range Reserve was to demonstrate the advantages for both stock and the land of controlling the grazing use of the open range. The subsequent record of research on the Jornada provides considerable insight into the developmental history of our western rangelands during the twentieth century. This record can be categorized into six principle themes: range management, husbandry, ecology, improvements, inter­disciplinary sciences, and ecosystem science.

A key problem for range management was quickly identified as inaccurate judgement of carrying capacity (Wooton 1915). The Jornada research program focused on quantifying proper utilization levels of the principle species. Jardine and Forsling (1922) established early guidelines for carrying capacities of black grama (Bouteloua eriopoda) rangelands. Subsequent research during ensuing decades has reinforced the accuracy of these guidelines, as Campbell and Crafts (1938), Paulsen and Ares (1962), and Holechek and others (1994) have reached strikingly similar conclusions. These authors all conclude that proper utilization of black grama should be less than 40 percent of the current year's growth.

The original philosophy was that proper utilization of the leaves and stems of the main forage plants was the basic principle of range management (Canfield 1939). General-management guidelines published in the 1910s and 1920s are very similar to those promoted today. For example, nearly 80 years ago Jardine and Forsling (1922) recommended the following drought strate­gies: (1) limit breeding stock to carrying capacities during drought, (2) utilize surplus stock during good forage years depending upon market conditions, (3) adjust range use seasonally depending upon growth charact­eristics of key species, (4) establish permanent watering points no more than 8 km (5 mi) apart, and (5) establish both herding and salting practices that achieve optimal stock distribution. Similar recommendations for drought conditions are outlined in a recent textbook on range management (see Holechek et al. 1995).

Initial research on livestock production also emphasized strategies for drought. Most of the original efforts focused on supplemental feeding programs, especially those that used locally available feedstuffs such as cottonseed products. For example, general recommendations were for .45 to .9 kg (1 to 2 lb) of supplemental protein to augment range forage for maintenance (Forsling 1924), with slightly higher quantities suggested for growth of stockers (Jardine and Forsling 1922). These general recommendations have persisted during ensuing decades. However, more recent research focuses on the use of protein and energy supplements for specific animal-production stages to trigger specific physiological activities (Gambill et al. 1994).

More novel research has emphasized specialized practices for emergency feed conditions and management of poisonous plants. Soapweed (Yucca elata) was found to be a palatable emergency feed when fed chopped and fresh (Forsling 1919). Ensiling or preparation was not determined to be necessary. Other plant species were either deemed not suitable as emergency feeds (i.e., Dasylirion wheeleri and Yucca macrocarpa) or required spine removal (Opuntiaspp.). Interestingly, burning spines from prickly pear cactus (Forsling [1924] estimated that one person could prepare cactus feed for 200 to 400 head of cattle in a day) was employed during the 1994-1995 drought in the southwestern United States. However, even in the 1910s and 1920s, the use of emergency feed practices was not viewed as responsible management for properly stocked rangelands.

As in other western rangeland regions, studies on poisonous plants provided both initial guidelines for livestock management and insight into the difficulties of plant control in a desert environment. For southern New Mexico, drymaria (Drymarla pachypbylla) became a problem in response to overgrazing (Little 1937). For clay soils, drymaria was viewed as an early serai or successional species (Campbell 1931). Avoidance of grazing in drymaria-infested areas was the recommended management strategy. Various measures of control (fencing, burning, spraying, and revegetation) were examined and determined to be either too expensive or ineffective. The recommended control practice was hoeing, but eradication was not viewed as a viable possibility. These general characteristics relative to management and control recommendations for poisonous plants persist (James et al. 1993).

Development of techniques (such as esophageal fistulation) for animal nutrition research led to investigations of the interactions between plants and livestock. Early work identified foraging behaviors of different cattle breeds (Herbel and Nelson 1966), but regardless of breed, cattle are generalists in this environment. A current research emphasis is identification of animal production capabilities more suitable to forage characteristics of desert rangelands (Walker and Winder 1993). Cattle genotypes with relatively modest performance traits, such as milk production, would be more successful in this nutrient-sparse environ­ment. It is possible that some desired characteristics will mirror those inherent to the original cattle breeds introduced to North America in the sixteenth century (Peinetti et al. 2011).

Research on plant-animal interactions now reflects the widespread distribution of shrubs in the Chihuahuan Desert. Foraging behaviors are strongly mediated by secondary plant chemistry (Estell et al. 1994), and chronic ingestion may have post-ingestive consequences that further shape preferences (Fredrickson et al. 1994). Remediation of shrub-dominated rangelands will require cost-effective technologies. The use of livestock as biocontrol agents for remediation will require detailed knowledge of this chemically mediated interaction in order to be an effective technology.

One of the early objectives of the Jornada was to understand the role of management in natural revegetation of rangelands (Jardine and Hurtt 1917). By the late 1920s, patterns of succession were described (Campbell 1929, 1931). These observations were generally in areas where livestock numbers had been substantially reduced (or eliminated) and year-long grazing had been adjusted to seasonal use. For example, on sandy soils, five successional stages were described in the natural revegetation of sand dunes: (1) mat stage of low-prostrate annuals, (2) ruderal stage of large annual and perennial forbs, (3) snakeweed (Gutierrezia sarothrae) stage (viewed as critical), (4) dropseed (Sporobolus spp.) stage (regeneration of perennial grasslands), and (5) grama-grass stage. These observations reflected the succession-and-climax paradigm of the period.

However, these early observations did not portend larger-scale transformations that were documented over ensuing decades. Probably the defining publication from the first half-century of research in the Jornada Basin was Buffington and Herbel's (1965) reconstruction of vegetative changes in the area between 1858 and 1963. The broad-scale encroachment of shrubs was attributed to seed dispersal, heavy grazing, and periodic droughts (Buffington and Herbel 1965).

Concomitant with the vegetation dynamics has been substantial change in surface soils. Gibbens and others (1983) documented effects of wind erosion of soil fractions as an ungrazed landscape changed from perennial grassland to coppice dunes dominated by mesquite. Both soil movement and the redistribution of sand, silt, and clay fractions were substantial.

Emerging from this reconstruction and associated research has been a key postulate regarding changes in ecosystem properties that accompany grassland conversion to shrubland (desertification). The central hypothesis is that the distribution of soil resources is altered from spatially homogenous, as seen in semiarid grasslands, to heterogeneous, as seen in shrublands, with desertification (Schlesinger et al. 1990). Further, these emerging resource islands act as positive feedback to further the invasion and persistence of shrubs. This hypothesis formed the basis for the research efforts of scientists affiliated with the Long-Term Ecological Research (LTER) program at the Jornada until the end of the 20th century (Figure 2). 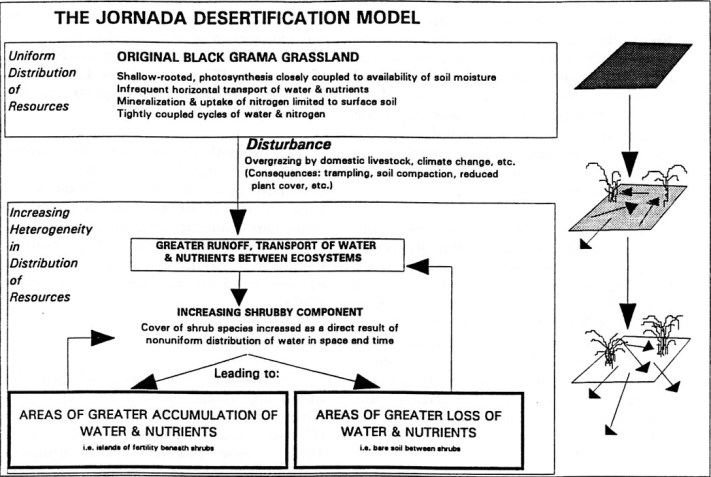 Figure 2. The "Jornada Desertification" model. A central hypothesis of research at the Jornada Experimental Range was that changes in vegetation are accompanied by a redistribution of water and soil resources in the landscape, which act as a positive-feedback mechanism to promote the desertification process.

This hypothesis countered the earlier observations regarding the potential for disturbed lands in arid environments to naturally revegetate to semiarid grassland conditions. Current research in other arid regions would also support a hypothesis of nonlinear vegetation dynamics in these environments (for example, see Milton et al. 1994).

The first articles on classic techniques for improving forage production on desert rangelands were published in the 1940s (Cassady and Glendening 1940; Parker 1943). These research efforts primarily focused on reseeding practices and a variety of brush-control methods. With the development of appropriate machinery (i.e., the rangeland drill) and herbicides, examinations of intensive improvement practices were a significant part of the research program for the next 45 years (Herbel and Ares 1961; Herbel and Gould 1970; Herbel et al. 1985; Parker 1949). The principles of these intensive improvements have been well articulated (Herbel 1983); however, economic assessments of these practices have not been wholly favorable. For example, Sherwood (1994) concluded that over 95 percent of the possible reseeding practices suitable for the Jornada Basin would result in a negative economic return. Similar doubts have been raised regarding the cost effectiveness of chemical methods for brush control (Herbel and Gould 1995).

One of the original objectives of the Experimental Range was to identify a management system that brings about natural reseeding of desired species (Jardine and Hum 1917). With an emphasis on developing specialized intensive tech­nologies, we did not accomplished this original objective. Low-input techniques that are economical and effective are still required. Four premises were advanced through the end of the 20th century: (1) biological integrity of both above- and belowground systems in addition to the short-term establishment of desired species is necessary to buffer against future disturbances; (2) resource redistribution over time at the community and landscape levels plays an important role in both desertifica­tion and restoration processes; (3) restoration efforts should focus on fertile sites best suited for re-establishment of native species; and (4) planting technologies should be based on readily available "natural" dispersal systems (Herrick et al. 1995).

Interdisciplinary research began in earnest in the 1960s. Rangeland science has typically been presented as an applied, interdisciplinary field, but involvement of related sciences (other than animal science and other directly related agricultural fields associated with range-livestock production) was slow to develop. The interactions with this new group of scientists occurred in conjunction with an expanding appreciation for the multiple uses and values of desert rangelands.

In the Jornada Basin, these interactions involved both biological and soil sciences. Gile (1966) provided new insights into soil-horizon development processes in arid environments. In particular, descriptions of clay illuviation in high-carbonate sediments greatly revised our understanding of argillic horizons in arid soils (Gile and Grossman 1968; Gile and Hawley 1972). These clay horizons develop slowly in deserts and can be masked by subsequent accumulations of carbonate.

Whitford and others (1983) provided initial insights into the role of decomposers and herbivores on nutrient cycling in the desert. For example, cleverly designed field studies identified the mass of subterranean termites (Gnathamitermes tubiformans) in the Jornada at 30 kg/ha (MacKay et al. 1989). Termites were estimated to recycle 11 percent of litter nitrogen and 13 percent of annual and grass standing crops (Schaefer and Whitford 1981).

For some time we have recognized an overwhelming need for research on the roles of soil biological systems including microbial elements in the recovery of degraded lands (Whitford and Herrick 1995).

The creation of the International Biological Program (IBP) provided the impetus for an ecosystem framework for research. The Jornada Basin was the location for the desert-grassland site within IBP. By the early 1970s, scientists had assessed system variables as a foundation for model development and expanded insight into ecosystem processes. For example, Pieper et al. (1972) quantified that 4 percent of captured energy was transferred from plants to herbivores in the desert.

As the IBP dissolved in the late 1970s, the LTER program emerged in the 1980s as its successor. The LTER, in its second decade, had five core research efforts: (1) pattern and control of primary production; (2) spatial and temporal distribution of populations selected to represent trophic structure; (3) pattern and control of organic matter accumulation in surface layers and sediments; (4) pattern of inorganic inputs and movements of nutrients through soils, groundwater, and surface waters; and (5) pattern and frequency of disturbances. Research in these core areas has provided a basis for modeling efforts. In particular, modeling has linked transport processes to the spatial and temporal dynamics of soil resources, a key premise of the Jornada model. Based on these efforts, the regional stability of desert ecosystems has been described as a function of resource distributions among smaller scale (patch) I mosaics within the larger landscape *(ReynoIds et al. 1995). Understanding the cascading effects (both positive and negative) of both management and remediation practices in the desert will require "the continued development of larger-scale ecosystem models (Peters et al. 2004).