The Jornada Basin in south-central New Mexico is often called the Jornada del Muerto (journey of the dead). It lies to the east of the Rio Grande on a plain 100 m above the river. The San Andres Mountains border it on the east; the Dona Ana Mountains correspond to the southern reaches; and the lava fields adjacent to Fra Cristobals form the northern limits. The plain varies in width from 8-50 km and is about 150 km long. The plain is primarily a closed basin with limited external drainage on the west edge.

Livestock were introduced from Mexico into this region during the early part of the sixteenth century (Hastings and Turner 1965). However, grazing was limited for over 250 years to the Rio Grande valley and adjacent slopes because of lack of surface water in the surrounding basins, including the Jornada. Some water could be found in springs and seeps in the mountains, but supplies were ephemeral and livestock use was sporadic.

The Jornada Plain began to be settled following passage of the Homestead Act of 1862 and the end of the Civil War. The first well on the plain was dug in 1867 at the Aleman Ranch along the southern portion of the Santa Fe Trail north of the Dona Ana Mountains. Yet, it was not until 1888 when the Detroit and Rio Grande Livestock Company pumped water from the river to a tank on the mesa and piped it to troughs 10 km to the western side of the plain that livestock grazing spread into the Jornada grasslands. Originally owned by U.S. Army officers from Michigan, the Detroit Company began to assemble grazing rights across the Jornada Plain during this period, and grazing use increased. In the later part of the century, the Bar Cross brand (and the 20 or so other purchased brands) of the Detroit Company could be found on 20,000 cattle, including 1,000 bulls on the Jornada Plain. The number of other stock, especially horses, is unknown, but is assumed to have been substantial.

Grazing was more limited on the sporadically distributed homesteads based around springs on the east side of the Jornada Plain. At Goldenburg Springs on the west slope of the San Andres, the three Goldenburg brothers reportedly watered 1,800 cows in the very early 1900s. Lack of developed water in the central and eastern regions of the plain limited livestock distribution in the area. The first wells were drilled in 1903 by Harvey Ringer at the current site of the Jornada Experimental Range Headquarters and at Red Lake and Middle Well (on the current Jornada). Ringer had begun to purchase portions of the Bar Cross from the Detroit Company as that ranch was dissolved, probably triggered by the severe drought  of the 1890-1893 period.

Charles Travis Turney was from Sutton County, Texas. Born in 1857 and on his own from the age of 8, C. T. Turney had spent his life working as a cowboy. Turney and some of his fellow Texans had decided that land had become too expensive in Texas and that the New Mexico Territory was their land of opportunity. He first traveled into New Mexico in 1900 and registered his t-hook brand. In 1902, he began moving a herd of cattle from Texas to southern New Mexico. He was delayed in the Pecos area for a year because of animal-quarantine restrictions but eventually arrived in Dona Ana County in 1904. In January 1904, Turney purchased the 16-ha lots at the headquarters site, Middle Well, and Red Lake, and $4,000 worth of cattle from Harvey Ringer. Then in February 1904, he moved his family to Mesilla and began building his ranch and farm enterprises. In the following eight years Turney purchased from other homesteaders in the area (including Joe Taylor and Hugo Seaburg) an additional 6 wells on 80 ha and shipped or trailed to the Jornada an additional 3,000 cattle. By 1912, Turney held deed to 120 ha and 9 wells that provided grazing rights to over 80,000 ha on the Jornada Plain for his 4,000-5,000 head of cattle. In fact, by 1912 he had already constructed fence around a portion of the borders of his ranch.

Concurrent with the expansion of livestock grazing in the late 1800s throughout the southwest region was a noticeable decline in rangeland conditions (Smith 1899). In New Mexico, deteriorated rangeland conditions were first documented by E. O. Wooton (1908). Wooton, a professor at New Mexico College of Agriculture and Mechanical Arts in Las Cruces, had spent years documenting rangeland conditions through the state (Allred 1990). In his first thorough report on the subject (Wooton 1908), he included results of a survey of southwestern cattlemen on the condition of regional rangelands. Of the 118 responses, 16 stockmen felt that rangeland conditions had improved in recent years, and 102 responded that there had been significant declines in grazing capacities. Of these 102 responses, 69 attributed the declines to overgrazing, and 33 blamed drought conditions. These observations were fairly universal and led to the first fledgling attempts at range research to develop suitable management and improvement practices by 1890 on small areas in the Texas panhandle (Smith 1899). Wooton had initiated his own experiments by 1904, but he was frustrated by the lack of a suitably large area for research that would have application to the large ranches typical in the Southwest.

Some of Wooton's early experiments were conducted on Turney's ranch on the Jornada Plain. Turney had fairly quickly become one of the prominent ranchers in the area, and it is apparent that he and Wooton established a rapport on the benefits of this research. It is also evident that the creation of a large reserve for research could serve to secure grazing rights for the cooperating rancher. A large reserve, the first of a significant size, had already been established in Arizona south of Tucson. Wooton left the College in Las Cruces in 1911 to serve as an agricultural economist for the U.S. Department of Agriculture in Washington, D.C. From this post he orchestrated the creation of the Jornada Range Reserve in 1912 from withdrawn, public-domain lands surrounding Turney's nine scattered holdings on the Jornada. President Taft signed Executive Order 1526, creating the Jornada Range Reserve 124 days after New Mexico was awarded statehood. Established within the USDA's Bureau of Plant Industry, Wooton returned to New Mexico to oversee the reserve's establishment. One of the first collaborations between Turney and Wooton at the Reserve was the completion of the perimeter boundary fence that secured Turney's sole use of the southeastern portion of the Jornada Plain. This was 22 years before the passage of the Grazing Act in 1934, which would establish grazing rights for ranchers using much of the remainder of the unpatented public domain in the western United States. Wooton's photograph of the fencing crew in 1912 has appeared widely in publications and brochures on western rangelands over the last several decades (Figure 1). 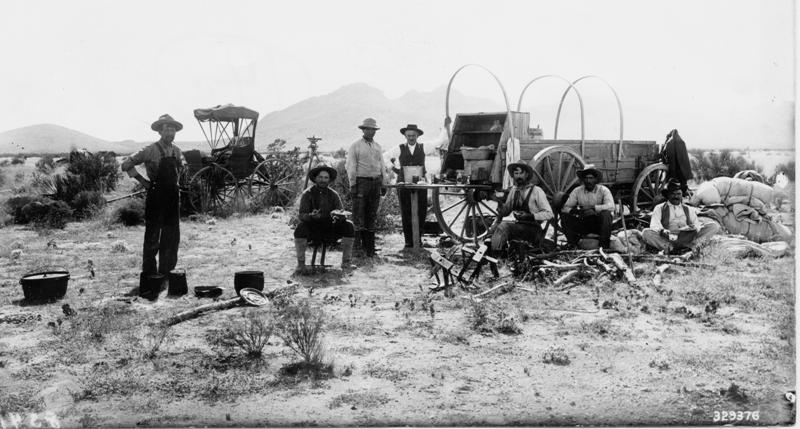 Surprisingly, given his role in establishing the Reserve and his successful collaboration with Turney, Wooton only remained as Superintendent until 1915. At that time, the USDA transferred the Reserve to the Forest Service and appointed a new director, C. Forsling. The U.S. Forest Service had established an in-house research program that was quickly creating a presence throughout the western United States. The research on the Jornada Plain began in earnest under Forsling's direction.

The initial objectives, as detailed in the 1915 Memorandum of Understanding between the Forest Service and Mr. Turney, were to

1. Develop   a  range-management  plan  to minimize stock loss during drought;

2. Establish a system of forage utilization consistent with growth requirements of forage species and which will build up depleted range and minimize nonuse losses;

3. Identify advantages of controlling stock and the range for improving stock performance;

4. Quantify carrying capacity of native range under control and comparative capacity of these lands without control;

7. Identify number and distribution of stock-watering places necessary to secure proper use; and

Unfortunately, Turney's tenure on the Jornada was also brief. Success during the early years led to expansion of his farming and ranching enterprises. In fact, in 1919 he bought the Bar Cross ranch from James L. Hurt. However, extended drought from 1916 to 1919 and a disastrous loss of cattle shipped into Mexico forced Turney to sell his interests in the Jornada in 1925. Yet, the mission of the Reserve had been establish­ed, and the legacy of Turney (and Wooton) was secure. C. T. Turney died in 1930.