The profession of range science in the United States has its roots in the closing decades of the nineteenth century, when widespread overgrazing and severe droughts resulted in acute episodes of livestock mortality, accelerated soil erosion, and a deviant loss of native forage plants across much of the western United States. The crisis was worst in the Southwest—western Texas, New Mexico, and Arizona—and beginning in the 1890s the US Department of Agriculture sent a handful of special agents to the region to assess the damages, study the causes, and identify potential remedies. The work of these scientific pioneers helped shape not only the emerging discipline of range science, but also the laws, policies, and institutions affecting rangelands and rangeland management throughout the nation (and, later, in many other nations as well). Among the institutional outcomes of these early assessments and reports  were large experimental ranges, beginning with the Santa Rita Experimental Range south of Tucson, Arizona, in 1903, and followed in 1912 by the Great Basin Experimental Range in Utah and the Jornada Experimental Range (The Jornada) in south-central New Mexico.

The Jornada has served as a field research laboratory since its establishment in 1912. The varied scientific activities on the range throughout this century have led to important discoveries about desert ecosystems that have been the basis for principles of land management that have application around the globe. This region is probably the most extensively studied desert on earth, and research activities both on-site and around the globe, continue to flourish in the 21st century. From microscopic-scale studies of soil microorganisms to synoptic-scale assessments of vegetation patterns detected from satellite-based sensors, the Jornada research group is addressing a multitude of research needs relevant to natural resource management issues.

Further description of "Our History" is provided in the following sections:

Text for Our History has been drawn from: 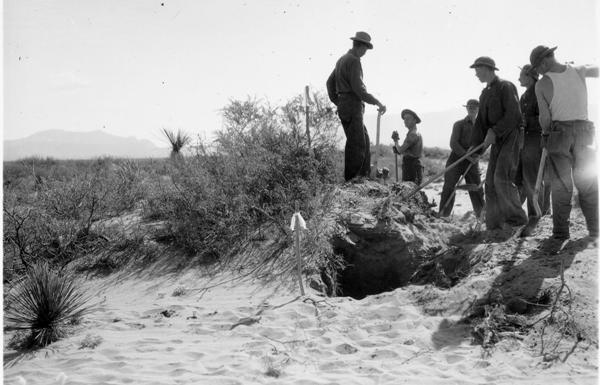 CCC boys working at bisect of a mesquite in a dune on the Jornada Experimental Range.  April 27, 1936.  (More historic photographs can be seen at https://jornada.nmsu.edu/jornada/photo-gallery.)